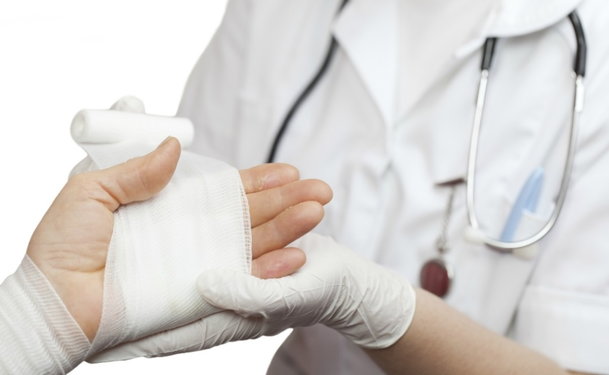 A burn refers to any damage to body tissue due to heat, chemicals, radiation or electricity. It is estimated that burns cause approximately three- to four-thousand deaths per year in the United States.

Thermal burns are caused by direct contact with an external heat source such as fire, hot liquids (scalding), hot objects or steam. Radiation burns are caused by sunlight or artificial sources such as radiation therapy or tanning beds. Chemical burns are caused by chemicals such as strong acids (hydrochloric or sulfuric acid) or alkalis (lye). Electric shock can cause burns due to the massive amount of electricity which passes through the body. Electrical burns may involve deeper areas of the body such as the internal organs, muscles and nerves without obvious damage to the skin.

Burns are generally classified according to the depth of the damage to the layers of the skin. The three types of burns according to depth are:

First-degree burns involve the superficial layer of the skin known as the epidermis.

Second-degree burns affect the superficial layer and the structures lying underneath. These burns may involve the layer beneath the epidermis known as the dermis and are also known as partial-thickness burns. These types of burns heal in approximately one to two weeks and do not usually produce scars. If the deeper layer of the dermis is involved, then it is known as a deep partial thickness burn, and may produce scarring and take more weeks to heal.

Third-degree burns involve the entire deep layer of the skin known as the dermis and the subcutaneous (under the skin) fat. Damage from this type of burn is extensive and may require skin grafting.

Burns cause the proteins inside the cells to denature and coagulate, resulting in a form of cell death known as coagulative necrosis. Due to the damage to the normal epidermal barrier, bacteria from the external environment may invade the area and cause infection. Damage to the blood vessels in the area causes them to leak fluids, and thus the burned area often becomes swollen with excess fluid (edematous).

Burns can cause fluid loss, and may result in decreased blood volume (hypovolemia) if the affected area is large. Infection is another complication due to the loss of integrity of the epidermal barrier.

Patients who are more than 60 years old, those who have more than 40 percent of their body surface area affected, and those who have suffered smoke inhalation or trauma are most at risk for complications of burns.

First aid for burns usually involves washing the burned area with copious amounts of water. For first degree burns and shallow partial-thickness burns, topical antibiotics such as silver sulfadiazine may be applied to prevent any bacterial infection. Deeper burns such as deep partial-thickness burns and third degree burns may require skin grafting.

Burn victims with large burn areas may develop hypovolemia, so treatment with blood transfusions may be indicated.