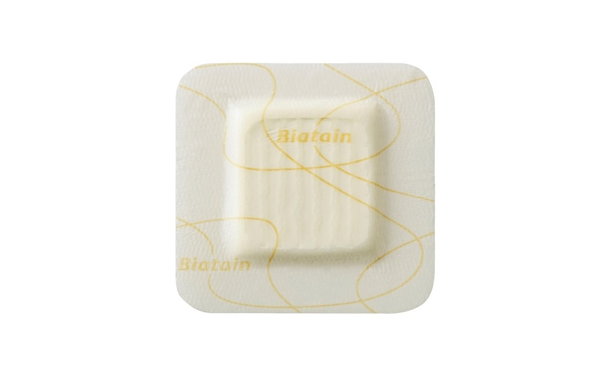 Biatain foam was introduced as early as the 1970s. Biatain foam is a soft, pliable dressing which is comprised of an outer layer that helps guard against bacteria and infection, and an inner foam layer that assists with absorbing fluids (exudates) during the healing process. Biatain dressing “locks” in the secretions while still allowing for a moist atmosphere, which aids in the healing process.

Biatain foam dressing is used in wounds with low-to-high exudates levels. Currently, Biatain foam may be used for a wide variety of wounds such as pressure ulcers, venous leg ulcers and non-infected diabetic foot ulcers. It may also be used for second-degree burns, wounds due to surgery (post-operative wounds) and even minor abrasions.

Wounds normally produce a fluid discharge composed of tissue fluids, proteins, and cellular materials such as white blood cells and other substances. This discharge has a tendency to leak and cause damage to surrounding normal tissues. Furthermore, this discharge may provide an environment in which harmful bacteria may grow. Biatain is able to reduce the potential harmful effects of this exudate by effectively absorbing it while still providing a moist wound healing environment. This results in enhanced wound healing and reduced wound leakage. Biatain foam also provides higher patient comfort due to its soft, flexible nature, and offers more convenience since the dressings don't have to be changed as frequently.

Many studies have been done to evaluate the effectiveness of Biatain foam in the treatment of wounds. A study reports the effectiveness of Biatain foam in diabetic foot ulcers, which resulted in a considerable reduction in the wound area and damage to the tissues. More recently, a study done using an ibuprofen-containing Biatain foam reported decreased pain intensity in patients who used this type of dressing. However, some studies report that Biatain is no more effective than traditional dressings and may not offer much benefit in terms of cost.

Biatain foam comes in adhesive and non-adhesive variants. It also comes in anatomically-shaped dressings suitable for wounds located in the sacrum and feet. Recently, a variant containing ibuprofen was released.

Who Is a Candidate?

Patients who are being treated with compression therapy and those under treatment for locally infected wounds may also use Biatain foam under the discretion of a physician.