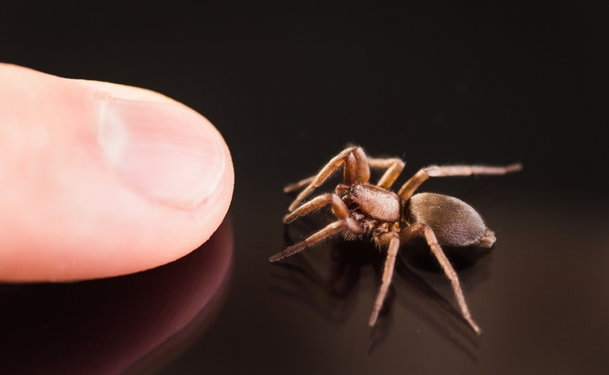 Only a few spiders are dangerous and strong enough to pierce the human skin and cause a spider bite. Frequently, bites that you suspect to be caused by a spider are actually caused by another insect. Most spider bites are not venomous or poisonous to humans, and the bites will heal with proper care and cleaning. However, there are two types of spiders found in the contiguous United States that are particularly venomous and dangerous to humans. They are the black widow and brown recluse spiders.

Black widow spiders are black or brown and females have a red hourglass marking in their belly. They are usually 0.5 to 1.5 inches in size. Black widows produce a venom called latrotoxin that can be dangerous but rarely lethal. The bite may be painless, and you may only see a slight swelling and a faint red mark at first. However, the symptoms may become more serious within few hours and can include intense pain and stiffness. Systematic symptoms like nausea, vomiting, fever and abdominal pains can also occur.

Brown recluse spiders are small (about 0.25 to 0.5 inches in size) and can be identified by a violin-shaped marking on the back. A brown recluse spider also has only three pairs of eyes instead of the typical four pairs. If you are bitten, you might feel a stinging sensation followed by an intense pain and redness. Eventually, the area of bite expands and develops a deep ulcer. Systematic symptoms include fever and nausea. In some cases, the bite of a brown recluse may be lethal, especially to children. There is no anti-venom for brown recluse spider venom.

Signs and Symptoms of Spider Bites

If you are bitten by a spider, the area of the skin around the bite may become warm, red and inflamed. In addition, a painful and/or itchy bump can form. In case you are bitten by a venomous spider, you may suffer from more severe symptoms once the venom reaches your bloodstream. The severity of your symptoms depends on how sensitive your body is to the venom and if you have any underlying health conditions that make you more vulnerable. Complications like coma, kidney failure and death can occur in severe cases.

Anyone who comes in close contact with a spider can be bitten. However, if you are a healthy adult, the symptoms are generally mild. More severe complications can occur among children and the elderly, or people with heart or other health conditions that can increase the severity of the venom.

Most spider bites can be treated at home. Clean the affected area with soap and water and try to slow down the venom's spread by elevating the site and keeping it still to lessen blood flow. You can also apply cool compress, like an ice pack, over the bite. Take antihistamines, aspirin or acetaminophen to relieve symptoms like pain, inflammation and itchiness. If possible, try to identify the spider. If you suspect it was a black widow or brown recluse spider, immediately call your doctor or go to the nearest hospital for treatment. You may require an anti-venom or other medicine to relieve symptoms and prevent complications.