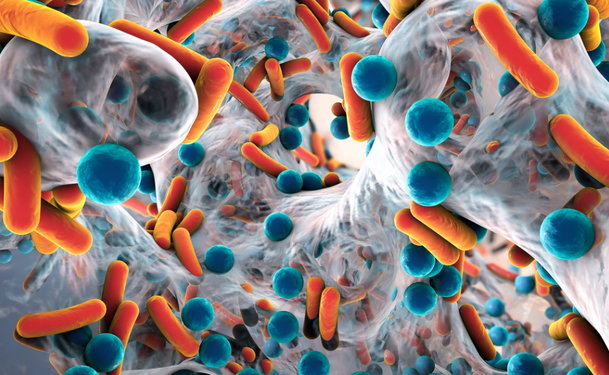 Biofilms in wounds are a form of infection that is made up of living microbes that are capable of forming colonies. Biofilms are generally composed of varied species of bacteria, fungi, yeasts, algae and other microbes, in addition to cellular debris. A biofilm is formed when certain types of micro-organisms attach themselves to the surface of wounds by secreting a gummy substance. These biofilms are known to infect most of the bodily tissues and may lead to chronic infections and non-healing wounds. In the United States, around 16 million new biofilm-based infections are diagnosed every year.

Causes of Biofilms in Wounds

The microorganisms in the biofilms are attached to one another and to the wounds with the help of strands made up of sugary molecules. These molecules are called extracellular polymeric substances or EPS. The production of EPS helps the biofilm to form a complex, three-dimensional structure within a few hours. These structures can also get detached as clumps of cells which move and may attach to another surface and propagate further. These complex structures are resistant to defense mechanisms of the body. Antibiotics are designed to attack bacteria, and may only partially eradicate the bacteria contained within a biofilm. Hence biofilms constitute a major obstacle to wound healing.

Multiple strategies are used concurrently to suppress the biofilm activity in a wound. The treatment strategies should only target the biofilm without affecting the defense and healing mechanisms of the human body. It is easier to manage biofilm-based wounds compared to biofilm-based systemic infections such as osteomyelitis, endocarditis, prostatitis, etc. This is due to the easy access to the biofilm surface, making the physical management of a wound possible. Some of the treatment approaches followed for eradicating biofilms from wounds are listed below: